HomeShopSort by years2014A Tribute to Gamani Corea: His life, work and legacy

A Tribute to Gamani Corea: His life, work and legacy 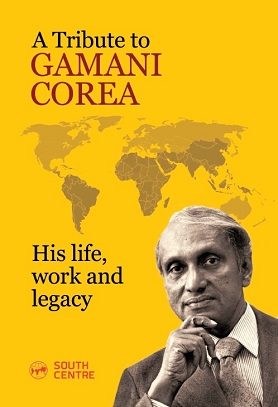 This book honours Gamani Corea, a statesman and one of the most eminent economists of the developing and developed worlds. He contributed greatly to the cause of the South and to South-South cooperation, having been instrumental in the establishment of the Group of 77 and the United Nations Conference on Trade and Development (UNCTAD). As a member of the South Commission, he also provided immense intellectual and personal support to Mwalimu Julius Nyerere, former President of Tanzania and Chair of the Commission, which produced the report entitled ‘The Challenge to the South’ released in 1990 and which recognized the need for greater cooperation between countries of the South.

Dr. Corea was closely associated with the South Centre from its inception in 1991. He is seen as one of the “founding fathers” of the Centre, having assisted Nyerere in gradually building the Centre into an intergovernmental policy research institution of the South that promotes the South’s views and perspectives on many issues in the global arena.

This publication puts together the speeches and contributions received on the occasion of the Special Tribute Seminar in Honour of Dr. Gamani Corea organized by the South Centre and the Permanent Mission of the Democratic Socialist Republic of Sri Lanka and hosted by the United Nations Conference on Trade and Development (UNCTAD) at the Palais des Nations, headquarters of the United Nations Office in Geneva, on 20 March 2014. It also includes contributions presented at the seminar on “Gamani Corea’s Contribution to Domestic and International Economic Policy”, organized by the Gamani Corea Foundation, the Institute of Policy Studies of Sri Lanka (IPS) and the Marga Institute on 3 April 2014 at IPS Auditorium, Colombo.

This book not only pays tribute to this eminent South thinker but also discusses Dr. Corea’s intellectual legacy as many of his ideas and thoughts can inform the response to the developmental challenges the global South is facing today.