Some Critical Issues Related to Access to Medicines and Intellectual Property 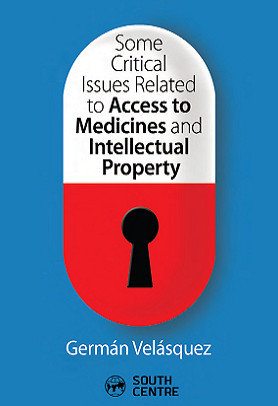 The international debate and negotiations over access to medicines in the last ten years have been one of the most important moments in the recent history of public health. This debate is taking place in UN specialized agencies like WHO, UNDP, UNCTAD, UNAIDS, WIPO, WTO, the Commission of Human Rights, NGOs working on health, philanthropic foundations, and the pharmaceutical industry. Dr Germán Velásquez has been a protagonist and witness of this struggle. He narrates in detail the most difficult moments of the negotiations, the victories, failures, challenges and the roles of the different actors.

This book is a collection of papers by the South Centre between 2011 and 2014 on the deliberations and negotiations in the World Health Organization (WHO) on access to medicines and their relationship with other actors dealing with international trade and intellectual property regimes. The South Centre is an intergovernmental research organization of developing countries on critical development issues for the South and is an observer to the governing bodies of the WHO. The author has extensive experience of the work of the WHO on the issue of the impact of trade agreements on public health, particularly access to medicines and intellectual property rights. It is hoped that the collection of papers presented in this book will be useful for policy makers and researchers interested in the deliberations in the WHO on the critical issues pertaining to public health, particularly access to medicines.

Germán Velásquez is the Special Adviser for Health and Development at the South Centre, Geneva, Switzerland.

Until May 2010, he was the Director of the World Health Organization (WHO) Secretariat on Public Health, Innovation and Intellectual Property, at the Director-General’s Office, in Geneva. He is a pioneer on the debate on health, intellectual property and access to medicines and he represented WHO at the WTO Council for TRIPS from 2001 to 2010. Germán Velásquez is author or co-author of numerous publications on subjects such as: health economics and medicines, health insurance schemes, globalization, international trade agreements, intellectual property and access to medicines.