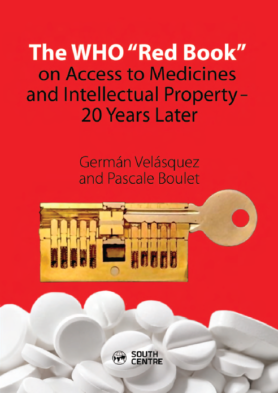 The publication in 1998 by the World Health Organization (WHO)’s Essential Drugs Department of the document “Globalization and Access to Drugs: Implications of the WTO/TRIPS Agreement” marked a point in time in the movement to ensure access to essential medicines for all. It had been drafted to implement a 1996 World Health Assembly resolution that constituted the first mandate given by countries to WHO to work on intellectual property in relation to health. The publication, often referred to as ‘the WHO red book’, marked the beginning of an international policy process to address the issue of innovation and access to essential medicines.

The WHO publication triggered a series of reactions from the pharmaceutical industry, the US Government and the World Trade Organization, reproaching WHO for stepping out of its role. In light of these attacks, the then Director General of WHO, G.H. Brundtland, decided to send the document to be revised by three independent academics specializing in intellectual property. The letters and documents criticizing the WHO publication as well as the review by the three international experts are reproduced in this book.

People living with HIV/AIDS in developing countries were dying because they could not afford the life-saving new antiretroviral treatments priced between USD10,000 and USD12,000 a year. Today, an increasing number of new medicines are protected by patents in the developing world and remain priced out of reach of patients and governments, as illustrated by cancer drugs and the new, very effective drug against hepatitis C priced at USD1,000/pill in the US. The escalation of prices of new patented medicines is already leading to unjustifiable medical access restrictions even in developed countries.

Germán Velásquez is Special Adviser for Health and Development at the South Centre in Geneva, Switzerland. Until May 2010, he was Director of the WHO Secretariat on Public Health, Innovation and Intellectual Property, at the Director General’s Office, in Geneva. He is a pioneer in the debate on health, intellectual property (IP) and access to medicines.

Pascale Boulet is a lawyer specializing in international public law with over 15 years’ experience in public health, international pharmaceutical and IP policies. She has worked with various public health organizations as IP and policy adviser, including the Drugs for Neglected Diseases initiative (DNDi), Médecins Sans Frontières (MSF) Campaign for Access to Essential Medicines and the WHO Department on Essential Medicines. She now works as an independent consultant in medicines law and policy.