Contributions on taxation, IFFs and human rights to IE report to UNGA 77, 30 May 2022

South Centre Contributions on ‘taxation, illicit financial flows and human rights’ to the report of the Independent Expert to the UN General Assembly, 77th session

The South Centre offers its comments to the report of the Independent Expert on the effects of foreign debt and other related international financial obligations of States on the full enjoyment of all human rights, particularly economic, social and cultural rights to the General Assembly, 77th session.

END_OF_DOCUMENT_TOKEN_TO_BE_REPLACED

A Tough Call? Comparing Tax Revenues to Be Raised by Developing Countries from the Amount A and the UN Model Treaty Article 12B Regimes

By Vladimir Starkov and Alexis Jin

In this research paper, we attempt to estimate the tax revenues to be gained (or lost) by the South Centre and African Union’s Member States under the Amount A and Article 12B regimes. Our analysis relied on sources of information available to private sector researchers but did not involve review of any information that taxpayers provide to tax authorities. Our research demonstrates that the comparative revenue effects of the Amount A and Article 12B taxation regimes largely depend on (a) design details of the Article 12B regime, (b) whether the country hosts headquarters of MNEs that may be in scope of Amount A or Article 12B taxation, and (c) what relief from double taxation, if any, the country will grant to domestic taxpayers subject to taxation under either the Amount A or Article 12B regimes.

END_OF_DOCUMENT_TOKEN_TO_BE_REPLACED

The South Centre today provided its comments to the OECD Inclusive Framework’s Task Force on Digital Economy (TFDE) on the Amount A: Regulated Financial Services Exclusion. These rules are part of the overall OECD project on the taxation of the digitalized economy known as Pillar One. They determine the amount of a Multinational Enterprise’s (MNE) profits that will then be partially redistributed to market jurisdictions, which are expected to be largely developing countries.

The Regulated Financial Services Exclusion seeks to remove financial institutions such as banks, insurance companies and asset managers from the scope of the tax, known as Amount A. This may greatly reduce the amount of tax that can be collected by the developing countries from the OECD solution.

END_OF_DOCUMENT_TOKEN_TO_BE_REPLACED

DATA FOR DEVELOPMENT: HOW TO LEGALLY CHARACTERIZE DATA?

Radical technological changes have always challenged pre-existing legal frameworks as demonstrated, for instance, by the commercialization of computer software independently from hardware and the use of genetic information to develop biotechnological innovations in various areas such as health and agriculture. The emergence of big data is a new and outstanding example of such situations. With the growing digitalization of multiple activities, ranging from education and health to ‘smart farming’ and the supply of the most diverse goods, the production and storage of data have exploded. Individuals, businesses and governments are generating an immense amount of data and this will only continue to grow in the future. Yet, the legal characterization of data is still a matter of considerable divergencies and debate. Policy makers and scholars are still searching for legal approaches suitable to address the complex relationships among producers, processors, controllers and users of data…

END_OF_DOCUMENT_TOKEN_TO_BE_REPLACED

The South Centre today provided its comments to the OECD Inclusive Framework’s Task Force on Digital Economy (TFDE) on the Amount A: Extractives Exclusion. These rules are part of the overall OECD project on the taxation of the digitalized economy known as Pillar One. They determine the amount of a Multinational Enterprise’s (MNE) profits that will then be partially redistributed to market jurisdictions, which are expected to be largely developing countries.

Extractive Exclusion is of critical importance to developing countries as it is meant to ensure that revenues from natural resources such as mining, oil, gas, etc are excluded from the scope of the tax, known as Amount A.

END_OF_DOCUMENT_TOKEN_TO_BE_REPLACED

Organized by South Centre and IT for Change 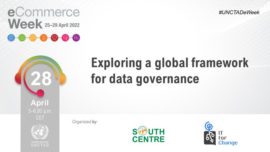 END_OF_DOCUMENT_TOKEN_TO_BE_REPLACED

Data regulation: Implications for the digitization of the economy and development 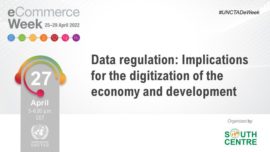 END_OF_DOCUMENT_TOKEN_TO_BE_REPLACED

The South Centre today provided its comments to the OECD Inclusive Framework’s Task Force on Digital Economy (TFDE) on the Draft Model Rules for Domestic Legislation on Scope. These rules are part of the overall OECD project on the taxation of the digitalized economy known as Pillar One. They determine the amount of a Multinational Enterprise’s (MNE) profits that will then be partially redistributed to market jurisdictions, which are expected to be largely developing countries.

The Model Rules for Domestic Legislation on Scope are of importance as this affects which Multinational Enterprises (MNEs) will come under the scope of the “digital” tax, known as “Amount A” of Pillar One. In other words, they determine which companies will finally pay the tax.

END_OF_DOCUMENT_TOKEN_TO_BE_REPLACED

STATEMENT BY DR. CARLOS CORREA, EXECUTIVE DIRECTOR OF THE SOUTH CENTRE, TO THE MINISTERS AND GOVERNORS MEETING OF THE INTERGOVERNMENTAL GROUP OF TWENTY-FOUR (G24)

The lingering COVID-19 pandemic, monetary tightening and increasing geopolitical tension have slowed down the global economic recovery. Projections for the 2022 global GDP growth have been slashed by about one percentage point by major international institutions. Together with inflation, especially spikes in food and fuel prices, and ongoing supply chain disruptions, uncertainty and fragility are looming over the two-speed world economic recovery. This has dimmed the hope to halt or reverse the trend of the rapidly increasing number of people falling into extreme poverty and suffering from hunger. While the COVID-19 virus continues to mutate, the access to vaccination continues to be a major world concern. Developing countries’ supply and financing constraints for vaccines and critical medical products must be addressed.

In view of the multiple challenges faced by developing countries, the efforts of G24 in helping to coordinate the positions of developing countries on international monetary and development finance issues remain critical. The South Centre will continue to support those efforts.

END_OF_DOCUMENT_TOKEN_TO_BE_REPLACED

Escaping the Fragility/Conflict Poverty Trap: How the interaction between service delivery, capacity development and institutional transformation drives the process of transition out of fragility

The main background and rationale of this research paper is that while donors’ scaled-up engagements in Fragility and Conflict-affected States (FCS) during the last decades were a resounding success in terms of official development resources devoted to FCS, the value for money compared to the ultimate goal of helping these countries move out of fragility was well below expectations. The World Bank ex post evaluation of the results of its engagement in FCS found that 80 percent of FCS that were on the harmonized list of fragile situations in 2012 remain on it today and the author’s observational study of a sample of 16 African FCS over a 5-year period found that only 1 made progress while 12 stayed in the status quo and 3 regressed. The main reason for the poor value for money is that while International Financial Institutions (IFIs) have spent tremendous amount of resources and brain power to build an excellent knowledge base about fragility and resilience, no such efforts were made to help understand the process and stages for a successful transition from fragility to resilience. The purpose of this paper is to help fill the knowledge gap in order to encourage development partners engaging in FCS to shift from a Fragility-focused to a Transition-based Engagement Business Model and thus minimize the risks of the poor value for money results. The paper will do so by outlining a methodology and framework for a better understanding of the process and a road map for a successful transition from fragility to resilience with measurable stage/sign posts and benchmarks to evaluate progress and necessary adaptation to donors’ strategic and operational support instruments.