The South Centre is celebrating its 25th Anniversary in the year 2020. The Centre was established by an Intergovernmental Agreement which came into force on 31 July 1995. Its predecessor, the South Commission, recognized the need to strengthen South-South cooperation in international affairs. In its report The Challenge to the South, the South Commission emphasized the need for countries of the South to work together at the global level. That is why the Commission recommended the creation of a South organization charged with undertaking this challenge. The South Centre, an independent intergovernmental think-tank of developing countries, was then created to analyze the development problems of the developing countries, encourage them to value and share their common experience and provide intellectual and policy support for them to act collectively and individually, particularly at the international level.

Webinar: Towards Justice in the International Economic Order: Proposals from the South

This document compiles the messages received from the Missions in Geneva of Member States of the South Centre and other communications received concerning the 25 years celebration. The South Centre is very grateful for the warm wishes and pledges of continued support expressed in these messages, and reaffirms its commitment to remain at the service of its Member States and the South at large.

As the South Centre turns 25, some of our experts share their thoughts on the role and significance of the organization, in the context of their respective work areas.

Photos on the occasion of the South Centre’s 25th Anniversary 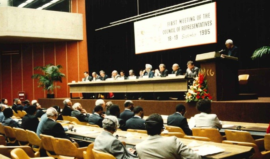 Thr First Meeting of the Council of Representatives of the Member States of the South Centre, 1995